Maine Open Farm Day has been an annual, statewide tradition for 30 years, but this year the festivities looked a little different.

The day is typically hosted and publicized by the Maine Department of Agriculture, Conservation and Forestry. This year, to prevent the spread of COVID-19, the state called off the official event and encouraged farms to use social media to reach audiences new and old.

Some Lincoln County participants, like Odd Alewives Brewery in Waldoboro, canceled their scheduled events entirely. Others, like Cape Newagen Alpaca Farm, held tours by appointment and took to Facebook and Instagram to promote their businesses. A handful of other farms proceeded with outdoor, in-person programs, provided that visitors donned masks and observed physical distancing.

Bristol’s Broad Arrow Farm opted for the latter route. Educating consumers about the benefits of regenerative agriculture and local, ethical farming is key to Broad Arrow’s mission, and Open Farm Day provides owners Dan and Maggy Sullivan with an opportunity to do just that.

The farm offered visitors a self-guided farm tour, a picnic lunch prepared by the farm’s on-site cooks, and even a “pig safari” that brought visitors to the farm’s pig herds where they roam and graze in the woods.

Dan Sullivan said the day was a resounding success.

“Open Farm Day is very important for us because I think COVID has taught everybody that we, as a nation, have been disconnected from our food,” he said. “This is an opportunity for people to reconnect with how their food is grown and made.”

The pig safari was a particular hit. According to farmer Luke Kidwell, showing visitors how Broad Arrow’s pigs are raised is the best marketing strategy the farm could employ.

“You want the things you eat to be as happy and healthy as can be. These are happy pigs,” Kidwell said. “And a lot of people don’t realize that most pork isn’t raised like this.” 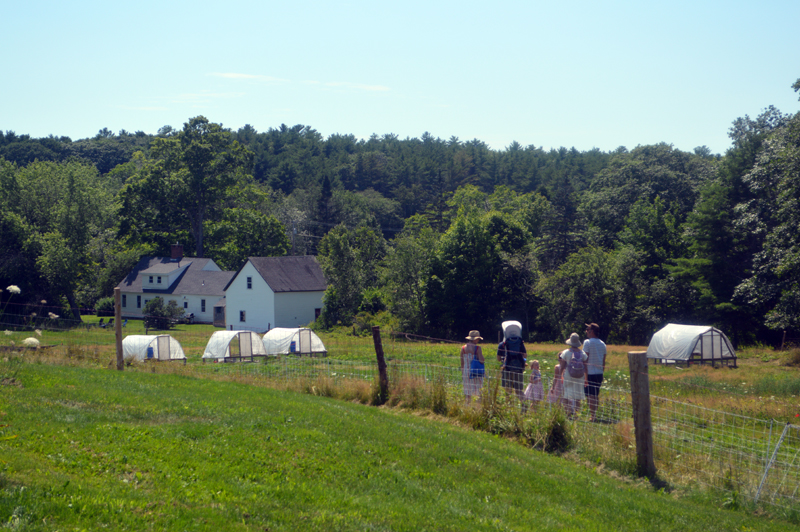 This year has been busy for Broad Arrow. The farm created a “Suppah Club” and began selling prepared dinners in February. When the pandemic forced local restaurants to discontinue indoor service, interest in the club skyrocketed.

In Alna, Don and Marcia Lyons, owners of SeaLyon Farm, have had a similar experience. Their farm share program has become extremely popular and sales at farmers markets have increased markedly over previous years.

This year was the Lyons’ first participating in Open Farm Day. They offered lavender picking and set up a stand to sell vegetables, lavender soaps, and jams, which they preserve on site. Don Lyons distilled lavender to demonstrate for visitors how he makes essential oils with the plants he harvests.

The Lyons decided to invite visitors onto the farm for Open Farm Day to get the word out about lavender picking, which is a new program as of this summer. In the farm’s many rows of lavender plants, Don and Marcia Lyons decided, visitors could stay safe and keep the requisite distance between each other.

“Don’t be afraid of the bees,” Don Lyons called to a group of lavender pickers. “They’re drunk on lavender. They won’t hurt you.”

The beehives are Marcia Lyons’ project and have made a world of difference for the farm, according to Don Lyons.

“Marcia’s bees are the secret,” he said. “They make everything grow.”

Anne Gobes, who owns Cape Newagen Alpaca Farm with her husband, opted to keep her farm’s Open Farm Day programming virtual. Visitors to the farm have to be accompanied by one of the farm’s employees if they enter the paddock with the alpacas. With limited staff this year, Gobes decided that publicizing an in-person event might overwhelm the farm’s capacity. 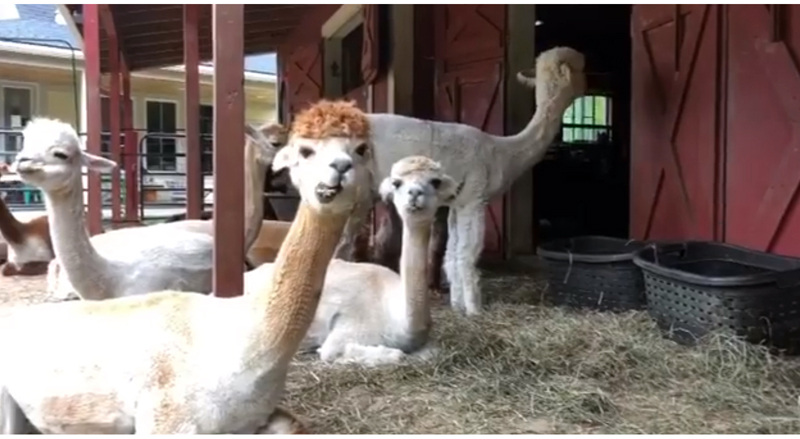 “The issue for us is that if we had 25 people show up, we don’t have the space to social distance them,” Gobes said. “Taking the chance of being outside for us wasn’t doable. There were a whole bunch of other safety factors that we ran through, and we decided we couldn’t do it.”

Instead, Gobes is participating in a week of social media programming hosted by the Department of Agriculture, Conservation and Forestry from July 26-31.

Her goal is to create a series of videos that capture the experience of visiting the Southport Island farm. Some videos will feature the farm’s 21 alpacas, while others will depict the process of looming their wool to create yarn, which Gobes ultimately knits using knitting machines located in a studio on-site.

Concerned about lost income in a slow tourism season, the farm decided to sell tickets for tours, which are capped at five participants per tour.

According to Gobes, other alpaca farms have not opened at all. She hopes the week of online Open Farm Day programming will help get the word out about Maine agriculture, and also familiarize farmers with digital marketing.

“I’m hoping this will help farms see that there are other ways to market your Maine-made products,” Gobes said.

Virtual programming can be found at the Facebook event “Maine ‘Open Farm Day Online’ 2020” and will conclude Friday, July 31 at 10 a.m. See the event page at tinyurl.com/yxa3czdo.