American investors might not be as familiar with Sea Limited (NYSE:SE) as they are with the U.S. tech giants that make up the “FAANG stocks,” or even China’s powerhouse “BAT” stocks — Baidu, Alibaba (NYSE:BABA), and Tencent (OTC:TCEH.Y). However, if its 200% year-to-date gain hasn’t attracted your attention yet, its future prospects just might.

How big could this internet giant-in-the-making get? Here’s how Sea Limited conquered much of Southeast Asia, including Indonesia, Vietnam, Thailand, the Philippines, Malaysia, Singapore, and Taiwan, while also fending off formidable competitors — and what its story so far suggests about its future. 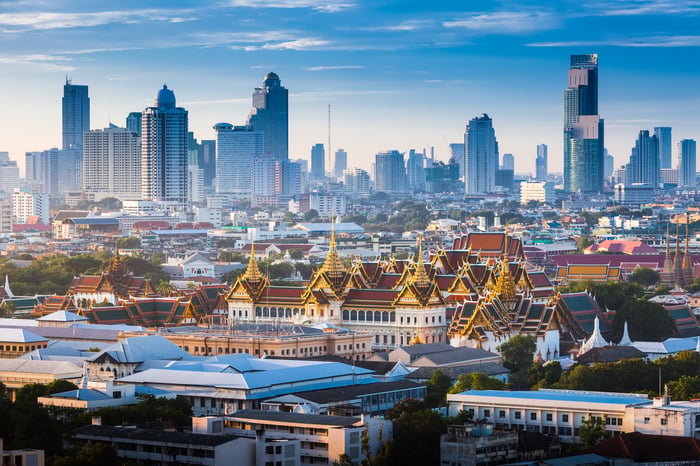 One might not have guessed that Sea Limited would have been so successful given how it started. The company was founded in 2009 during the depths of the Great Recession by entrepreneur and CEO Forrest Li, and its initial product was a communication tool for video gamers. However, since then, it has expanded methodically and intelligently into third-party game publishing, then into creating its own games, notably the massive hit Free Fire. This core digital entertainment business, spanning mobile and PC games, is called Garena.

Like its Chinese peer Tencent — which actually mentored Sea Limited and today owns 25.6% of it — it proceeded to use its highly profitable mobile gaming business as a jumping-off point to expand into other areas, taking a larger and larger share of the digital consumer economy in the region.

Taking a page out of the book of South American e-commerce giant MercadoLibre (NASDAQ:MELI), in order to facilitate its e-commerce growth, the company also launched a digital financial services business: SeaMoney. Though digital financial services only accounted for about 1.2% of revenues last quarter, the newest segment in the company’s empire grew 282% year over year. Moreover, MercadoLibre has shown by example that digital wallet and payment services have the potential to be big businesses, perhaps as big as e-commerce over time.

Sea Limited delivered impressive results during the pandemic-fueled first quarter, with revenue up strongly across all segments:

Of the company’s main segments, only its digital entertainment services segment is profitable, and it’s still logging adjusted net losses in the other three, adding up to overall adjusted losses to the tune of about $239.4 million in the first quarter.

Nevertheless, there appears to be a lot of operating leverage in the sub-scale segments, especially e-commerce. E-commerce is currently actually gross-margin negative for the company as it continues to build out its fulfillment and logistics platform to help sellers reach each unique market. However, its gross loss margins have narrowed greatly over the past year:

Another encouraging sign is that the largest percentage increase in spending came from research and development costs, which more than doubled in the first quarter compared to the prior year. That suggests a lot of spending is going toward investment in Sea’s growth, not just its current business.

Peering ahead a decade

Former Sea Limited President Nick Nash once said that the company was aiming to help solve the basic “food groups of life — entertainment, retail and consumption, payments and financial services and risk management as a category — food, as a category… that’s a pretty big chunk of GDP right there.” It appears that Sea certainly has larger opportunities in the areas in which it already dominates, merely due to the development of Southeast Asia’s digital economy. According to a projection made last year by Alphabet, the Southeast Asian internet economy, including the online travel, e-commerce, online media, and ride-hailing sectors, will triple in size between 2019 and 2025, going from $100 billion in gross merchandise volume to $300 billion.

But more than envisioning what Sea Limited’s products and services will look like in 10 years, it seems fairly clear that management under CEO Li knows what it’s doing. Partnering with Tencent to dominate mobile and PC gaming in Southeast Asia, the company has already impressively surpassed Alibaba-backed Lazada in e-commerce in the region — a huge feat, considering that Alibaba is the e-commerce leader in China. And although digital payments are more developed and competitive in the region than in many others, I wouldn’t be surprised to see Sea Limited outperform the market’s expectations in this niche. Part of the company’s edge appears to be its ability to tailor its products and services to the local nuances of each country and region where it operates, while also benefiting from its multi-country scale.

The company’s massive 7.5-times revenue growth over just the past five years is a testament to the vision of Li, who still owns 25.4% of its shares and holds 38.8% of the voting power.

With a highly invested, passionate founder-CEO, a large market opportunity, and a clear advantage over its rivals — at least at the moment — I wouldn’t be surprised if Sea Limited is a far larger company a decade from now, with a market cap in the hundreds of billions of dollars — maybe even above $1 trillion — compared to its mere $58 billion valuation today.