The Creative Industry is one of the worst affected by the current Covid-19 crisis. It is projected to be hit twice as hard as the overall wider economy.

The Department for Digital, Culture, Media and Sport (DCMS) have just announced a £1.57 billion investment to protect Britain’s culture and arts industries.

Boris Johnson described the industry as the ‘beating heart of this country’ and hopes this unprecedented investment will protect it for future generations.

This seismic step from the government comes after new research projected a combined revenue fall of £74 billion for this sector in 2020. The music industry specifically is expected to lose at least £3 billion and 60 per cent of jobs.

This industry was previously growing at five times the rate of the wider economy, employing over two million people and contributing £111.7 billion economically — more than the automotive, aerospace, life sciences and oil and gas industries combined.

Following this report and having witnessed the desperation themselves, stars from the UK’s live music sector including Ed Sheeran, Little Mix and George Ezra alongside thousands of venues issued an urgent plea for support from the government during what would have been the height of summer festival season. Artists, venues, production companies and others from across the industry began posting films and photos of their last live gig under the tag #LetTheMusicPlay. Their message was heard loud and clear as the investment followed in a matter of days.

Grace Flynn, a Festival Marketing Manager, also wrote an open letter to Mr Oliver Dowden and received over 500 signatures. Her fear was that without an extension to the furlough scheme, the industry would simply collapse.

This is what she had to say:

‘I decided to write the letter after hearing that the changing of the furlough scheme would mean employers now need to put 20 per cent in, this leaves our industry in a dire situation and an overwhelming amount of people’s jobs within our sector are now at risk.

The pandemic has meant that festivals run by UK-based companies have been cancelled across Europe. Clubs we work with aren’t able to open because of social distancing, and whilst the furlough scheme has been a needed lifeline up until now, with it changing from this month, redundancies across the sector are rife.

From build crew to managers, DJs to promoters, there is no end in sight for us as the government have completely neglected our sector, which is worth £1.1billion and contributes to the UK’s fifth biggest industry’.

The planning and production for festivals means that unlike shops or restaurants, they cannot simply be ‘reopened’ within a matter of weeks. But if these venues can’t open, a whole industry is at stake. This confirmed investment in response to distress calls will allow the industry to stay afloat — for now at least.

The sizeable fund is a reactive measure to the absolute desperation faced by musicians and venues. However, there has yet to be any detailed plan released about how this money will be allocated across the sector. This lack of clarity for the music industry is worrying, as with venues still closed, jobs are not safe and the brink of collapse  lurks worryingly in the distance. 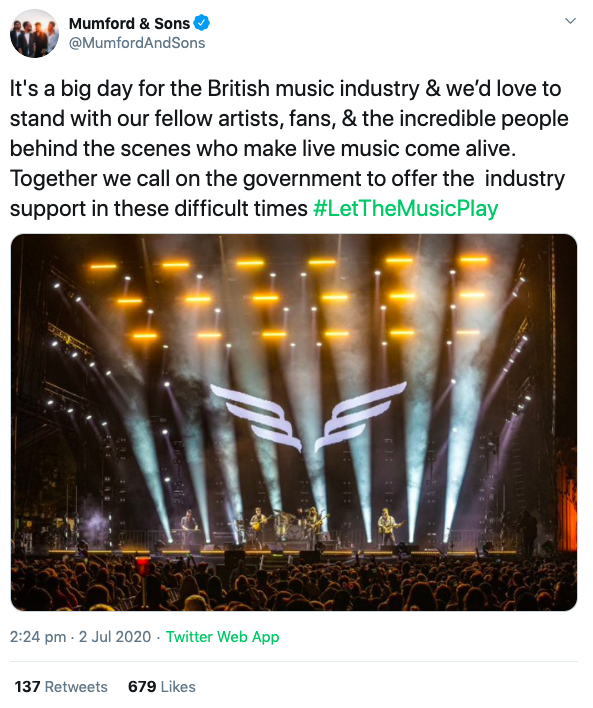 Caroline Norbury MBE, CEO of the Creative Industries Federation and Creative England has said there will be so much more to do over and above this investment to ensure that this sector can continue to thrive:

‘While this support will rescue many, so much has changed during the pandemic; there won’t necessarily be an easy return to normal’.

Eloise is a live music performer, all of her gigs until the end of the year are cancelled and her sister, Natalya, is a contemporary trained dancer who was due to begin rehearsals for a UK tour in August. Plunged into uncertainty, they have had to create their own new normal and adapt during lockdown but remain unsure as to how much longer they can keep up their new act.

This is what they had to day:

‘At first, we found this incredibly hard to digest, but knew that it was just something we would have to endure. With a lot of free time now on ours hands, when we heard that our next-door neighbour couldn’t celebrate her fourth birthday party due to lockdown, we decided to use our skills to create a little bit of magic for her.

My sister and I decided to order some Elsa and Anna costumes from Amazon, and surprise her with a special Frozen performance on her drive. With no finical income, we were going to be super naughty and send our costumes back straight after the show … but when we uploaded the video online, to our complete and utter surprise, 16K views later we were bombarded with enquires from fellow families across the country for the very same experience.

We quickly put together a Facebook page and thus created ‘Lockdown Magic’. Since our very first performance in May, we have now reached over 100 families across the UK with our bespoke performances, and bookings in the diary all the way up till the end of the year’.

FJLaw is a music producer and a BBC Hot-Listed musician, he relies on seven to eight live performances a week as his main source of income. He’s seen the massive change first-hand but has also welcomed this time as a chance to produce some great, uninterrupted music.

These are his reflections on staying motivated and inspired:

‘I’ve got everything I need in my bedroom, you don’t need to be in a fancy studio anymore to create music. These days it’s so easy to get hold of everything; it’s very accessible and transportable. You can pack a whole studio setup in a rucksack.

At the same time you have to live to be able to write songs and be inspired, you have to feel something in order to have the drive to be creative. There’s less going on so you look for TV programmes and newspapers to steal a story. You have to look at other places rather than just at yourself.

There’s something about the energy in a room with other people when you’re writing compared to a buffering Face Time, but people have been able to send me vocals and I can work on it in my bedroom. So I’ve been able to produce other people during lockdown completely virtually, which you definitely couldn’t do before. I don’t prefer it but at least it’s been something’.

Ultimately, this significant investment for the industry (the largest in history) is a welcomed relief to these struggling artists and venues. It provides the luxury of time for the music industry to plan the safest route to reopen. However, the lack of clarity surrounding how the fund will be divided means there is still a great amount of insecurity for people like Eloise, Natalya and Danny.

It remains uncertain how much stability the funding will provide long-term for an industry that has always been defined by its ability to deliver live rather than virtual entertainment and interaction. A new ‘normal’ is needed, but whether audiences will be willing to support it is another matter entirely.