Jewish newspapers have been printed in New York every week since America’s first English-language Jewish weekly, The Asmonean, began publication on Oct. 26, 1849. “Knowledge is Power,” the pioneering paper proclaimed on its masthead. It looked to unify American Jews and to provide them with what they needed to know to be both better Americans and better Jews.

Edited by a New York Jewish businessman named Robert Lyon, The Asmonean billed itself as “a family journal of commerce, politics, religion and literature devoted to the interests of the American Israelites.” It was livelier, bolder and more diverse in its subject matter than most other 19th-century American Jewish newspapers. It took as its model the best family journals of the day and lived on for nine years until Lyon’s death.

By then, a new Jewish weekly newspaper had appeared in the city: The Jewish Messenger, edited by Rev. Samuel M.  Isaacs of Congregation Shaaray Tefila and his children. It pledged to be a “messenger of good tidings,” and devoted itself “to the interests of our coreligionists, the Jewish religion, Jewish intelligence and literature.” It took pride in reporting, after a year of publication (1857), that nothing “derogatory to the character and good name of Israel” appeared in its pages, that it had refused to “meddle in politics” and that it continued to promote the “old established institutions of our forefathers.” While hardly lively, the newspaper was dependable and, insofar as possible, unobjectionable. It ran for 45 years.

The Asmonean and The Jewish Messenger reflected opposite views on what Jewish journalism should be. The Asmonean looked to emulate the lively canons of general journalism, provided multiple takes on contested issues and committed itself above all to the pursuit of truth. The Jewish Messenger felt that a newspaper should above all serve as a bearer of “good tidings,” avoided controversy, promoted established institutions and, in general, portrayed the Jewish community at its best.  Both views live on in Jewish journalism to this day. 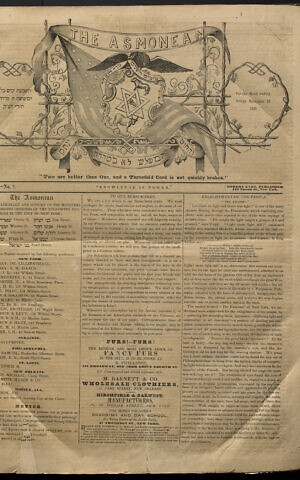 The copy of the front page of The Asmonean, the first English-language weekly, which began publication in New York in the fall of 1849. New York Public Library Digital Collection

For a time, back when newspapers were privately owned and made money, readers voted with their pocketbooks as to which model of Jewish journalism they preferred. At the turn of the 20th century, four different local Jewish newspapers competed for English-speaking readers in New York. The highbrow American Hebrew, founded by young Jewish revivalists looking to “stir up our brethren to pride in our time-honored faith,” saw itself as the Jewish community’s newspaper of record. It published a wide range of articles and opinions, and was known as “one of the leading conservative organs of Judaism in America,” though liberal writers were welcomed as contributors. The saucy Hebrew Standard, characterized by the Jewish Encyclopedia as “the first attempt at the issue of a cheap, popular Jewish newspaper in the English language,” was irreverent and pro-Orthodox; it appealed to the masses. The Jewish Messenger continued to offer “good tidings.” The Hebrew Journal, of which no copies apparently survive, focused according to an early historian, on “society matters.”

Over the ensuing decades, many Anglo-Jewish newspapers merged or disappeared. Anti-Semitism partly explains why. As fear stalked the Jewish community and conditions deteriorated both domestically and abroad, newspapers became frightened to report to English-language readers news that reflected badly on the Jewish people. They worked hard to promote an image of consensus and sobriety, lest they unintentionally play into the hands of Jews’ enemies. While no shortage of controversies and scandals took place — witness the fierce debates over Zionism, the tactical debates over how best to respond to anti-Semitism or the many scandals connected with Prohibition violations — these largely went unreported. Prudence dictated what appeared in the pages of the Anglo-Jewish weeklies; they focused on the unobjectionable. That is why the great Jewish leader Rabbi Stephen S. Wise derided them as “weaklies.”

The 1967 Six-Day War, depicted at the time as a “watershed in contemporary Jewish public affairs” and “a turning point in American Jewish consciousness,” sparked a new era in Jewish journalism. Within three years, a vibrant Jewish student press had sprung into existence, featuring 20 lively college Jewish newspapers (and about double that number just a year later). They featured critical, investigative and irreverent articles about the Jewish community, totally different from what had become Anglo-Jewish journalism’s customary fare. Even The New York Times took notice. “A Jewish student press, reflecting what has been called ‘a new Jewish consciousness’ has arisen on college campuses in North America,” it reported in 1971. It summarized the themes that united these papers under four headings: (1) “rejection of the anti-Zionist, pro-Palestinian stand of much of the New Left”; (2) “a profound concern for the status of Jews in the Soviet Union and a cry that more can be done for them”; (3) “a contempt for what is parodied as the ‘chopped liver and mahjongg’ culture of adult Jews”; and (4) “an insistent demand for a shake-up in the priorities served by ‘the Jewish Establishment’.”

Against this background, in 1970, New York’s Jewish Week first appeared on newsstands. It billed itself as “New York’s New Jewish Newspaper,” and its full name (reflecting several previous mergers) was The Jewish Week and American Examiner. Nothing about it was nearly as avant-garde as the Jewish student press. The new paper, like so many other Anglo-Jewish weeklies around the country, was privately owned and its editor, Philip Hochstein, was long past the age of retirement.  Still, he understood that “the times were a changin’.”

In 1972, Hochstein hired a 25-year-old graduate of Yeshiva University to the staff of the paper; his name was Gary Rosenblatt. “I was about 40 years younger than the next youngest editor on staff at the time,” Rosenblatt later recalled. “I got to cover just about every story that involved getting out of the office.” He left in 1974 for the Baltimore Jewish Times, where he was editor for 19 years.

Following Rosenblatt’s departure and a series of financial challenges, The Jewish Week underwent a full-scale makeover. Eleven major leaders of the New York Jewish community recreated it as “a high quality not-for-profit Jewish newspaper to cover all aspects of the Jewish community.” The new mandate was to cover the broadest spectrum of Jewish ideas and points of view. The Jewish Week won funding from UJA-Federation and was henceforward sent out to all donors of $50 or more — at its peak, more than 100,000 households.  That made the paper one of the highest-circulation Jewish weeklies in the diaspora and “the central source for news for and about the Jewish community of New York.”

The unstated background to the paper’s makeover may have been the Watergate scandal (1972-74) that drove Richard Nixon from the presidency. That raised the status of America’s journalists and crowned them as the guardians of American values. Crusading young investigative journalists like Robert Woodward and Carl Bernstein at the Washington Post were joined by “New Journalists” who integrated literary techniques, passion and advocacy into their writing. In time, these kinds of investigative and “new” journalism shaped Jewish journalism as well.

In 1982, Phillip Ritzenberg, formerly assistant managing editor of the New York Daily News, became publisher and editor of The Jewish Week. “My view was that the paper had to be a contemporary American newspaper whose content happened to be Jewish,” he recalled to Jewish Week culture editor Sandee Brawarsky in 2003. Ritzenberg hired new journalists, brought in Wolf Blitzer (then with the Jerusalem Post) to offer regular reports from Washington, added essays and opinion pieces reflecting divergent views, modernized production and design and garnered multiple awards for The Jewish Week from both the New York Press Association and the American Jewish Press Association. Refusing to serve as “a communal drum major,” he helped redefine for the paper’s readers what “responsible Jewish journalism” meant.

Ritzenberg departed in 1993, becoming one of the country’s premier experts in newspaper design. To succeed him, The Jewish Week brought back Gary Rosenblatt, who in the meantime had turned the Baltimore Jewish Times into one of country’s best Jewish newspapers and been a finalist for a Pulitzer Prize.

During his 26 years at the helm of The Jewish Week, Rosenblatt further expanded the definition of “responsible Jewish journalism.” He produced a series of memorable investigative articles that placed the problem of sex abuse on the Jewish communal agenda; encouraged and mentored scores of young journalists; deepened cultural coverage; oversaw the development of The Jewish Week’s website and broadened the paper’s community outreach in myriad ways.

Still, “the times were a changin’.” The digital revolution upended every American newspaper’s business model, driving lucrative advertising (including profitable classified and personal ads) to the internet, making a great deal of news available for free and perilously raising the average age of print readers as young people fled to the web. According to a 2019 study, more than one-in-five newspapers in the United States shut down in the previous 15 years, and the number of journalists working for newspapers dropped by half. The Jewish Week was not immune to these forces.

In addition, the number of subscribers, and the subsidy, received from UJA-Federation declined because, as The Jewish Week’s longtime board chair, Lawrence A. Kobrin, explained in his autobiography, Jewish philanthropy “began to focus primarily on major donors” and the number of smaller contributors to the umbrella philanthropy declined. That led “to an ongoing diminution in donor subscribers,” whose numbers shrunk by more than half, greatly reducing the newspaper’s circulation.

The coronavirus pandemic greatly accelerated the digital revolution. People of all ages learned to negotiate Zoom, and a host of online media have reported large subscription increases. At the same time, local advertising collapsed once stores, restaurants, entertainments and public events shut down. Though readership rose during the pandemic, newspaper revenues have sharply fallen. One analyst described the current situation for America’s newspapers as an “extinction-level crisis.”

The Jewish Week’s decision this month to place its print newspaper on hiatus serves as a sad but necessary response to this crisis. Canada’s leading Jewish newspaper, The Canadian Jewish News, has already shut down. Jewish weeklies across the world likewise stand imperiled. The Forward, the English-language successor to the revered Yiddish daily, discontinued its print edition in 2019. Closures, mergers and digital makeovers are inevitable.

“The print model has been broken for a number of years now, compounded, quite honestly, by a lack of Jewish engagement,” The Jewish Week’s current editor in chief, Andrew Silow-Carroll, told The New York Times. “Maybe that’s an easy way of saying we have an older readership that isn’t being replaced. And the way to find those readers, I think, is online, which is a reason I thought a move like this was inevitable.”

One hopes, as this new chapter in the history of New York Jewish journalism begins, that The Jewish Week’s twin commitments to “responsible Jewish journalism” and “to cover all aspects of the Jewish community” continue. Print newspapers may be doomed, but the proclamation on the masthead of The Asmonean back in 1849 stands as true today as when it first appeared: “knowledge is power.”