It is the second week of December; the streets are still hot from the effects of harmattan and the end-of-year festivities. Muftau, a middle-aged farmer prepares for a trip to Dawanou International Grain Market in Kano where he hopes to sell his sesame seeds to an exporting company for a hefty profit.

As a farmer with over 15 years experience in sesame seed planting, he has mastered the market and learnt that the patient dog eats the fattest bone or in this case, margin.

Most of his farmer colleagues sold their grains back in September – during the harvest season when supply was high – for around ₦200,000/tonne.

But Muftau preferred to depend on the proceeds from his groundnut, millet, wheat and rice harvests to feed his family, and left the sesame seeds harvests in his barn.

In December however, when other farmers are low on supply, various exporters still wish to buy sesame seeds. So he retrieves his harvest from the barn and sells them for as high as ₦250,000 – ₦300,000/tonne.

Other times, when he is cash strapped or when the exporting company no longer needs sesame seeds, he sells them to off-takers (retailers or wholesalers) at Gujungu market in Jigawa for about ₦170,000 – ₦180,000 per tonne.

The profit obtained from the sale of sesame seeds is what has attracted over 200,000 farmers who currently belong to the National Association of Sesame Seeds Famers.

Just like Muftau, the sesame seeds industry consists of smallholder farmers who plant on one to five hectares of land every planting season. They harvest between half a tonne and one tonne of sesame seeds per hectare (one hectare is two football fields).

Everyone wants a bite

The sesame seeds industry has been growing silently in the Nigerian commodity space.

In the first quarter of this year, it tried to drag us out of a trade deficit with a 76% increase in its seed exports. 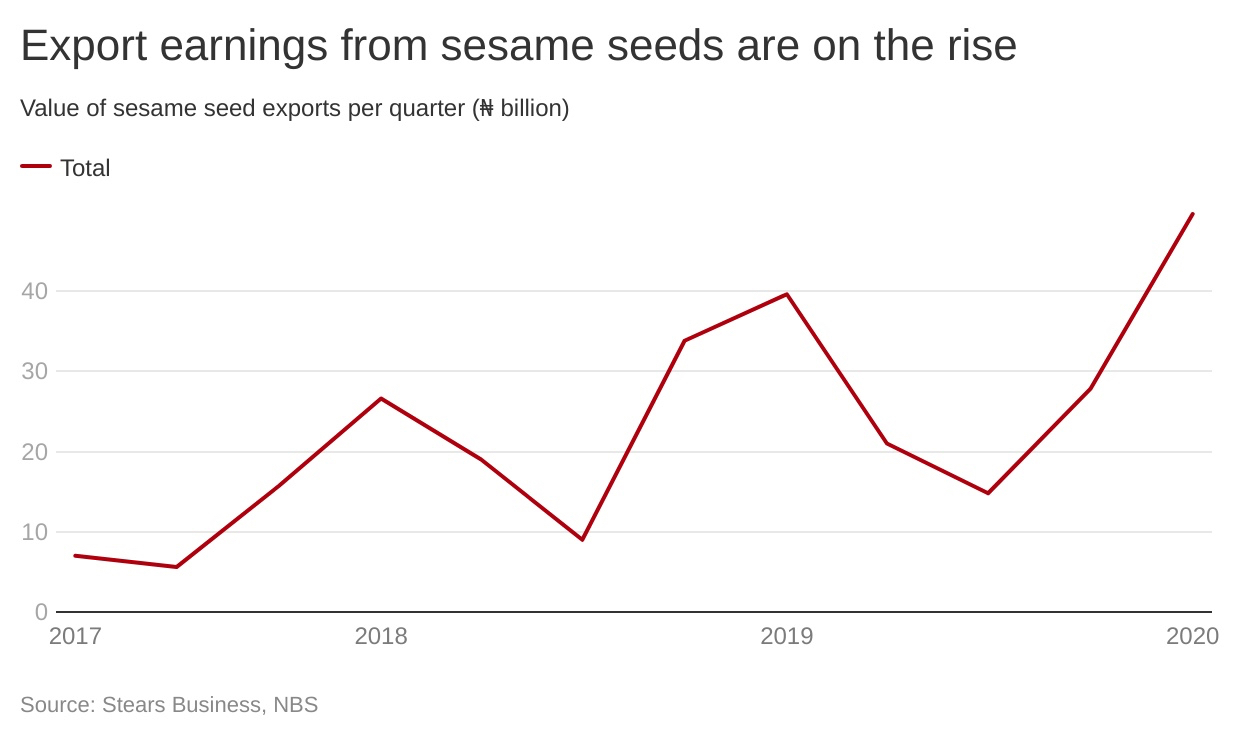 Note: Every year, Q3 (July – September) export values are the lowest because that is the harvest season and when every farmer is looking to sell. Therefore, prices are much lower than at other times of the year.

Sesame seed is the ideal Nigerian export product because it is easy to produce; it does not require much water, or fertiliser, is easy to preserve and in high demand internationally. Our largest buyers are Japan, Turkey and China who bought seeds worth ₦9.8 billion, ₦9.5 billion and ₦9.3 billion respectively in Q1 2020.

Nigeria is also the seventh-largest exporter of sesame seeds in the world and leads the country’s ranking on agriculture exports. In Q1 2020, we earned ₦49 billion from exporting its seeds, compared to ₦35 billion gained from exporting Cocoa in the same period.

Even this rose has its thorns

However, there are still risks, as even such ideal qualities do not shield farmers from losing an entire farmland to unknown pests and diseases.

“In the 2017 wet planting season, in Jigawa, for instance, over 80% of the sesame seeds planted did not grow. What you have is smallholder farmers looking to cash in on the market for sesame seeds with little or no scientific knowledge about how to plant and grow it,” says Celestine Okeke, a Department for International Development (DFID) Associate.

Muftau faced a similar plight in 2019 when he planted on one hectare of his farmland and was able to only obtain 400kg of sesame seeds, as opposed to the one tonne (1000 kg) he usually gets.

According to him, his farm had encountered a fungal infection which his extension worker (someone assigned by the government to educate him on farming) – claimed was due to “climate change.” He was unable to explain what the actual disease was and how he could prevent it from happening again.

This is one of the areas that Farmcrowdy comes in – to guarantee returns. In a conversation with Gabriel Yadua, the head of Sourcing, Trading and Logistics of Farmcrowdy, he explained that Farmcrowdy employs the use of precision agriculture to ensure that viable seeds, adequate irrigation and proper soil testing translates to maximum yield.

“We provide technical support to the farmers through things like trackers, drones for area mapping and modern irrigation systems which will otherwise be too complex for these farmers to do themselves,” he says.

Such intentional planting helps to discover diseases in the crops in the early stages and prevents them from infecting the entire farmland.

Although this could increase the cost of production by as high as ₦160,000 per hectare, it translates to bountiful harvests.

While an average smallholder farmer plants on one hectare of land and produces between half a tonne to one tonne of sesame seeds, Farmcrowdy farmers produce a little over two tonnes per hectare.

What determines the price?

The final value farmers receive for sesame seeds is determined by a host of factors, from a country’s volume of harvest to the quality of seeds produced by a competing nation.

But despite the various factors involved, the price of sesame seed is relatively more stable than that of other crops.

So like Muftau, farmers know a range of prices that sesame seeds can get sold for at several times of the year. But they are not as certain for a crop like maize.

According to the President of the National Sesame Seeds Association, Alh. Sheriff Balogun, “Sesame is a very stable crop. Maize, for example, was sold at ₦7,000 per tonne last month. The price had been low for some time, and farmers were depressed because of it, but now the price is ₦18,000. Such volatility in prices makes it difficult to plan investments.” 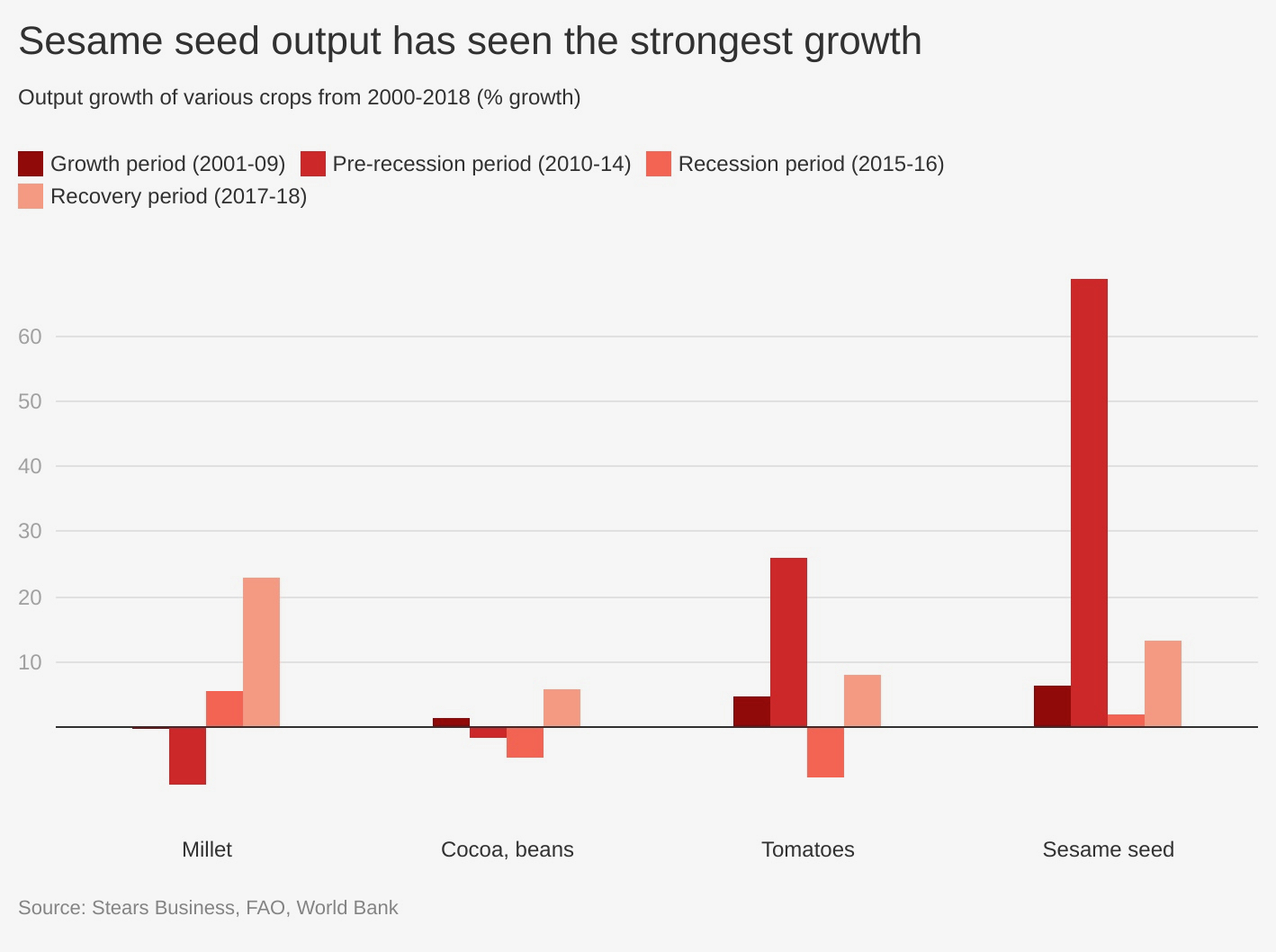 The price of the seeds is also stable because sesame seeds do not require much water to plant, requires low irrigation, and it is easy to store. Due to the presence of high oxidants in sesame seeds, they can be stored for long without spoiling.

However, Nigeria isn’t able to take advantage of this due to our inadequate storage problem – one of the most significant challenges in farming and food processing.

Unlike Muftau, who owns a barn of his own, other smallholder farms don’t store their sesame seeds. Instead, they sell directly to the off-takers after the harvest and transfer the responsibility of warehousing and logistics to them.

Before exporting, the off-takers and wholesalers have the option of storing the sesame seeds in field warehouses – close to the farms in Benue, Jigawa, Taraba or Nasarawa, for a rent of about ₦200,000 per annum.

The other option is to bring the sesame seeds closer to the point of exit (i.e. Lagos) so that exporters can retrieve them at the slightest demand.

The challenge, however, is that the warehouses in Lagos are more expensive than those close to the farms.

Therefore, after the exporters buy the seeds from the off-takers or wholesalers, they keep them stored away from the port until they are ready to move them.

Large exporters of sesame seeds such as Olam Group and Wacot Limited own their warehouses and processing plants. There, the seeds to be processed for exports are stored.

Others are not so lucky.

Enough money to go round

The gap in the storage facilities has not deterred the numerous intermediaries of the value chain from taking a bite of the profits. From off-takers to retailers and wholesalers, the sesame seeds harvest exchanges hands severally before getting to the final user.

On average, smallholder farmers take their harvest – which ranges from 100kg to two tonnes – to retail markets like the Gujungu markets.

For example, a retailer at Gujungu market who buys 400kg from Muftau might buy the same amount from nine other farmers giving her a total of 4.4 tonnes.

She can sell it to a bigger wholesaler who buys from others to increase his supply to 40 tonnes and then, an exporter, who tries to get at least 500 tonnes before he exports.

Regardless of the relatively high number of intermediaries in the value chain, there is still room for bountiful returns for each player.

However, having so many people in the value chain comes with its problems.

Too many cooks spoil the broth

Aggregating harvests from various farmers exposes the final product to inconsistency. Monitoring all the farmers’ methods is currently not possible so their yields can be of different qualities which may lead to wastage at the point of export.

In a bid to control this problem and bypass some middlemen, Farmcrowdy controls the production of its farmers.

For instance, Farmcrowdy has a network of about 2,500 farmers planting sesame seeds which it sells directly to aggregators for as much as ₦300,000 – ₦350,000/tonne.

One primary reason for the higher price is the consistency in their harvest, which the exporters are willing to pay more for as it prevents them from rejected.

Clement Ishahu* shares a sad experience where he had to cut his price by half due to the inconsistency problem, “We had agreed about $5000 per tonne but by the time it got there [Indonesia], we had to negotiate to about $2500. Let’s say they want grade 1, I was giving them grade 1, 2, 3 and 4 and some were even spoiled,” he said sadly.

Wacot Limited, one of the largest exporters in Nigeria, also protects themselves from inconsistent harvest by having contracts with specific farmers who sell directly to them.

The AFEX Commodity Exchange Market plans to include sesame seeds in its listings, which could solve some of these issues. AFEX conducts due diligence on the products sold on their exchange. Getting a crop like sesame seeds listed would guarantee its value and open up an avenue to yield further returns for investors.

The exchange also provides secured storage for grains which serve as collateral for farmers to access finance and allow them to get better prices for their produce.

Nevertheless, current success in the sesame industry shows there is potential to improve the growth of our non-oil exports and deepen income streams for the country.

With consistent efforts at improving the yield of the industry to take up more global market share, Nigeria inches closer to restoring the lost glory of its agriculture industry.

Subscribe to read more articles in our newsletters here and to our WhatsApp channel for daily briefings.