In route news, JetBlue will consolidate its Long Beach operations into Los Angeles International this fall; Alaska and American may speed up its global alliance partnership; AA changes terminals at London Heathrow; United adds more service to Israel; Panama’s Copa returns to SFO and other U.S. destinations; Air Tahiti Nui is coming back to LAX; Qantas apparently pushes back long-haul service well into next year; and route news from Lufthansa, Alitalia and Etihad.

JetBlue will make a major change in California this fall by moving its Long Beach operations to Los Angeles International, linking them up with its transcontinental flights there. When the transition is complete after October 6, the airline will operate 30 flights a day at LAX to 13 destinations, including its existing transcon Mint service to New York JFK, Boston and Ft. Lauderdale, its new Mint route between LAX and Newark beginning July 23 (JetBlue is also starting new San Francisco-Newark Mint service on July 23), and existing non-Mint transcon routes between LAX-Buffalo and LAX-Orlando. (JetBlue’s Mint routes use aircraft that have a premium front cabin with lie-flat seats and upgraded service.)

With Long Beach out of the picture, JetBlue will introduce seven new LAX nonstop routes on October 7, including San Francisco, Las Vegas, Seattle, Salt Lake City, Reno-Tahoe and Austin, along with seasonal service to Bozeman, Mont. JetBlue’s reservations system shows a LAX-SFO schedule of two daily roundtrips in October, with fares starting at $49 one way. The airline’s Long Beach-Portland route will be dropped, but JetBlue will still fly to Portland from New York and Boston and will introduce new Portland-Ft. Lauderdale service starting in October. JetBlue said its LAX flights will continue to use Terminal 5 there; the new LAX routes went on sale this week.

The company said its California consolidation turns LAX into a west coast focus city for JetBlue and includes big ambitions there: “JetBlue plans to embark on a strategic expansion over the next five years with plans to reach roughly 70 flights per day by 2025. This will include multiple new markets, both domestic and international, some of which have never had nonstop service to and from LAX.” In addition to its enlarged LAX presence, JetBlue will continue to serve Ontario and Burbank.

Although JetBlue’s announcement didn’t mention it, San Diego Airport said this week that the carrier also plans to launch new daily flights between SAN and Newark on August 6, competing in that market against United and Alaska Airlines. According to JetBlue’s reservations site, the SAN-EWR flights will not offer Mint service but will feature daytime flights in both directions.

We reported last week on American Airlines’ plans to restructure its international network; on the west coast, that plan includes fewer international flights out of Los Angeles and more out of Seattle, where AA is forging a deeper partnership with Alaska Airlines. The two carriers had said previously that they expected Alaska to become a full partner in American’s Oneworld global alliance by the middle of next year, but now it looks like that might be accelerated. According to media reports, Alaska CEO Brad Tilden told an aviation webinar that his airline now hopes to be a part of the Oneworld family by the end of 2020, or about six months earlier than expected.

As part of its expanded partnership with Alaska, American has already announced that it will begin new service from Alaska’s Seattle hub to London and Bangalore next year and will move its LAX-Shanghai route to Seattle if it gets governmental approvals. According to Routesonline.com, American has now set March 27 as the launch date for its SEA-London Heathrow flights, which will operate daily with a 777-200ER. Speaking of Heathrow, American this week moved its operations there into Terminal 5, the home base for its joint venture partners British Airways and Iberia. AA had most recently been using Terminal 2, moving there from Terminal 3 in April when LHR consolidated terminal space due to the sudden drop in flight operations caused by the coronavirus pandemic.

Don’t miss a shred of important travel news! Sign up for our FREE weekly email alerts.

In other Alaska Airlines news, the Seattle-Monterey route that the carrier was supposed to launch this summer with a daily Horizon Air flight has now been pushed back to February of next year. And Alaska said that in October, it plans to start deploying 76-seat, three-class Horizon Air E175s on select routes within the state of Alaska, including Anchorage-Fairbanks.

As previously announced, United this week resumed non-stop service between San Francisco and Tel Aviv with three 787-9 flights a week. The carrier also said this week that it plans to revive Chicago O’Hare-Tel Aviv flights in September three times a week; to increase its current Newark-Tel Aviv schedule from seven flights a week to 10 next month; and to resume Washington Dulles-TLV service three days a week in October. Also in September, United said, it expects to bring back Chicago-Hong Kong service with one weekly flight and to resume Los Angeles-Sydney operations with three weekly roundtrips. (United already flies to Hong Kong and Sydney from San Francisco.) 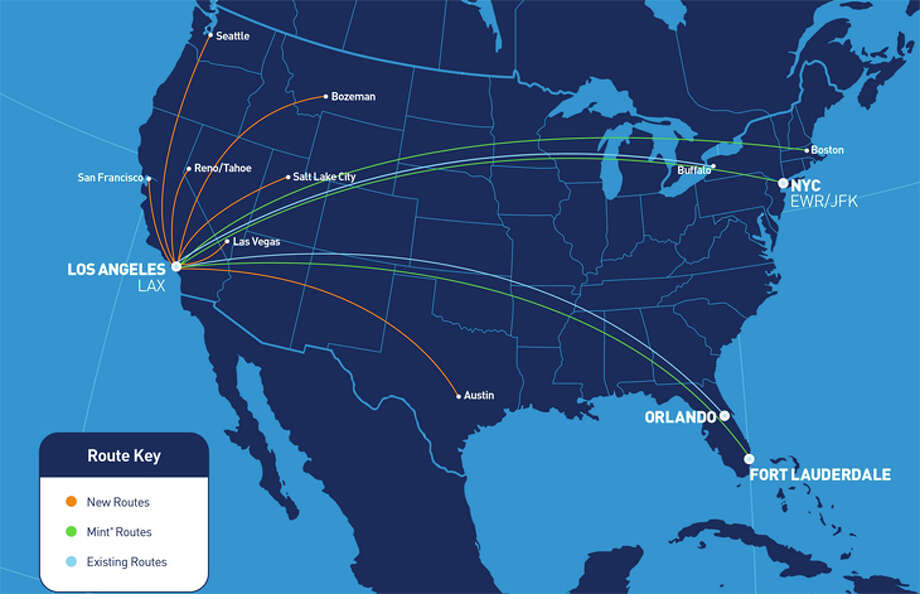 JetBue will move its Long Beach flights to LAX in October.

JetBue will move its Long Beach flights to LAX in October.

Panama’s Copa Airlines, which has been grounded for the pandemic, is expected to start flying again in August. According to a schedule update on Routesonline.com, Copa has set Sept. 4 for its return to San Francisco International, when it will launch two flights a week to Panama City. On August 7, Copa is due to start two weekly Los Angeles flights and to resume service from Panama City to New York JFK and Miami, followed by Orlando and Washington D.C. on Aug. 21 and Chicago on Sept. 4. (While Copa won’t be flying it’s newest Boeing 737 MAX jets with lie-flat business class seats on the route, you can take a look inside one of these planes through Chris’s eyes in a previous Trip Report from Panama City.)

Another airline coming back to the U.S. is Air Tahiti Nui, which is due to resume its Los Angeles-Papeete route on July 14 with three 787-9 flights a week, increasing to five a week on Aug. 1. However, the airline’s LAX-Paris sector is still suspended; instead, Air Tahiti Nui will operate a flight from Papeete to Paris via Vancouver.

As usual, we must remind readers that just because airline service to a particular foreign destination is once again available, that doesn’t necessarily mean you can go there. Many foreign governments have imposed restrictions on American travelers, ranging from mandatory quarantines upon arrival to outright bans, so it is the traveler’s responsibility to research these restrictions before booking a flight.

One airline that apparently won’t be coming back to the U.S. any time soon is Qantas. The Australian trade publication Executive Traveller is reporting that the carrier’s long-haul flights could be unavailable at least through March 2021. “While the flights themselves have not been canceled, and all previous bookings remain in place, the move prevents new bookings from being made on any overseas Qantas route except for flights to New Zealand,” the publication said. “Travelers searching for Qantas flights to the likes of Asia, the USA and London through to March 28, 2021 are being shown only flights operated by selected partner airlines such as Emirates, British Airways and Cathay Pacific.”

Chris McGinnis is SFGATE’s senior travel correspondent. You can reach him via email or follow him on Twitter or Facebook. Don’t miss a shred of important travel news by signing up for his FREE weekly email updates!

SFGATE participates in various affiliate marketing programs, which means we may get paid commissions on editorially chosen products purchased through our links to retailer sites.