Kroger (NYSE:KR) stock has its fair share of challenges in past years amid competition from the likes of Walmart, Amazon, Target, and numerous local and regional grocery store competitors. Now, with Albertson’s (NYSE:ACI) launching an IPO in late June, Kroger faces potential added competition as a consumer staples stock.

Albertson’s move means Kroger will have another nationwide grocer competing for investors interested in this sector of the market. While it’s still a little early yet to really gauge how this will affect Kroger stock, both Kroger’s recent history and the Albertson’s rollout as a public company might provide a little insight on where things are headed.

First, a little background. It’s helpful to note that the companies competing as grocers nationally aren’t all the same. Large grocers such as Amazon, Walmart, and Target actually derive most of their profits by selling non-grocery goods and services. Also, while smaller grocery chains such as Sprouts are publicly traded, Kroger was the only nationwide grocery-centric stock until recently.

On June 26, Albertson’s offered 50 million shares on the public market at $16 per share. This offer was actually a scale back from its original plan to sell 65.8 million shares at between $18 and $20 per share. While the COVID-19 pandemic did boost sales in recent weeks, it’s likely the broader economic downturn from the pandemic also dampened investor enthusiasm and resulted in the smaller offering.

The market’s reaction to the stock since the IPO appears to have confirmed this relative lack of interest. Albertson’s stock trades lower than the $16 per share IPO price as of the time of this writing.

Still, Albertson’s stock performance is not to blame for Kroger’s stock troubles over the past several years. Kroger’s stock peaked in late 2015 at $42.75 per share. But new competition from Amazon intensified (including through its purchase of the Whole Foods grocery chain in 2017), and Kroger seemed ineffective in its response to these actions and to omnichannel efforts from Target and Walmart. As a result, investors started selling Kroger stock en masse. The company would go on to lose more than half of its stock value in the 21 months following its peak.

Kroger’s stock price still remains well below that all-time high but the company has somewhat recovered. New initiatives and some operational changes that are finally having an effect have helped the stock rise by nearly 50% over the last 12 months and around 13% just in 2020. 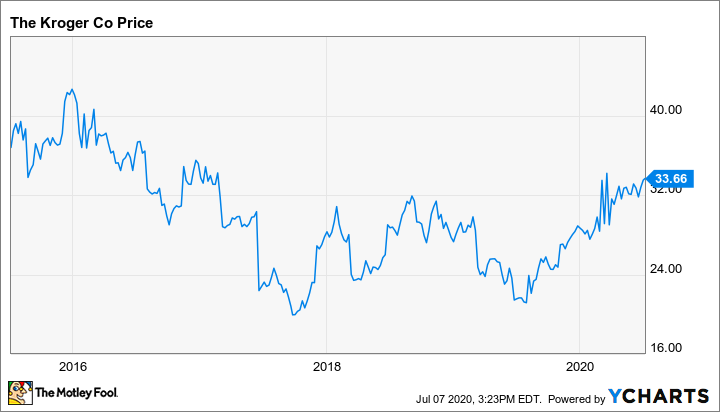 It also helped that the pandemic forced many to stay home and stock up on consumer staples and widespread restaurant closures forced more home cooking. As a result Kroger got a solid boost in revenue and profits in its most recent quarter. In-store sales were up 19% from the same quarter last year, while digital sales increased by 92%. This led to a 69.4% surge in Kroger’s adjusted earnings per share.

Admittedly, most analysts expect these numbers to level out as macroeconomic conditions begin returning to normal. As such, analysts predict a 28.3% increase in profits for the current year (fiscal 2021) and an 8.5% decline in fiscal 2022.

And the volatility did not affect the dividend. Kroger gave investors a double-digit percentage boost in the dividend and the current annual payout stands at $0.72 per share, generating a yield of about 2.2%. This is only marginally higher than the S&P 500 average return of approximately 1.9%. However, Kroger has increased its dividend every year since 2007. With the payout ratio at only around 25.6%, the company remains well-positioned to continue annual increases.

Moreover, Kroger stock currently trades at a forward P/E ratio of about 11.7. Not only does that come in lower than Amazon, Target, or Walmart, but even a smaller grocer likes Sprouts commands a higher P/E ratio (currently 16.2). While it is true that Kroger may see sales levels go back to pre-pandemic levels soon, all its peers face the same issue. Even with the near-term uncertainty and the recent surge in the stock price, Kroger appears to trade at a discount.

With all that said, we return to the question of whether Albertson’s IPO will affect Kroger’s stock price.

Admittedly, the two weeks since the IPO is not a lot of time to develop any significant trends. Although Kroger stock caught a small positive bump on the day of Albertson’s IPO, it has been effectively flat since then. The rise in Kroger’s stock in 2020 does suggest the grocer’s shareholders are relatively happy with its performance, whether Albertson’s is private or public.

The lack of any significant effect might be because we have relatively little information from Albertson’s itself so far on how it’s doing as a public company. The earnings release provided around the time of Albertson’s IPO covered the company through Feb. 29, but it offered little to no insight on how the coronavirus pandemic affected the company.

Albertson’s did note $466 million in profit for fiscal 2019, implying a trailing P/E ratio of around 15.6 and a market cap of about $7.28 billion. Albertson’s higher P/E suggests that Kroger stock offers more value for the investment dollar. Albertson’s has not declared any dividends at this point, so it’s fair to assume Kroger remains the better dividend stock (at least for now).

What these initial numbers do seem to suggest is that Kroger looks like an unappreciated bargain in comparison to some of its peers. Analysts anticipate that the company will return to its pre-pandemic growth plans as COVID-19 abates. While the broader economic downturn may discourage some near-term interest in Kroger stock, it does not appear that competition from Albertson’s stock has stifled Kroger’s performance.