After depreciating nearly 80% in the last 5 years, TripAdvisor’s (TRIP) stock seems to have hit the bottom and has all the chances to appreciate in the near future, as there’s an indication that the travel industry slowly starts to recover. While in the past TripAdvisor failed to unlock value despite being one of the most popular travel websites on Earth, it has been able to constantly generate a positive FCF and its current cash reserves outweigh the company’s total debt. At the same time, with more than 460 million monthly active users, TripAdvisor could be viewed as a potential takeover target by major OTAs and tech companies, which have plans to establish a stronger presence in the online travel niche.

Even though the company will be unprofitable this year due to the pandemic, the analysts estimate that TripAdvisor will return to profitability in 2021. Considering that the stock trades close to its all-time low, I decided to purchase the company’s shares, as I believe that the recovery of travel and the potential acquisition in the future will drive TripAdvisor’s stock higher in months to come.

Recovery On Its Way

The spread of COVID-19 all around the globe disrupted TripAdvisor’s business. As a company that heavily relies on the growth of the tourism industry, TripAdvisor suffered immense losses in the first half of the year. Over the years, the company’s earnings were fluctuating from time to time as a result of poor governance, but in the first three months of the current year, it had probably the worst performance in its history. In Q1, TripAdvisor’s revenues declined by 26.1% Y/Y to $278 million, while profit during the period fell by 161% Y/Y to a net loss of $16 million.

However, TripAdvisor is not the only company among its peers that showed a poor performance due to the pandemic. The table below shows that lots of companies had similar results and are not profitable anymore. Only Booking (BKNG) along with TripAdvisor has been profitable on a TTM basis and has a positive P/E ratio. With EV/EBITDA of 9.19x, TripAdvisor could be considered undervalued compared to its peers, as the industry’s median EV/EBITDA is 11.58x. However, considering the uncertain environment in which all the companies from the table operate, a simple comparable analysis is not enough to decide whether it is worth purchasing TripAdvisor shares or not.

Source: Yahoo Finance. The table was created by the author

Online travel is a very competitive niche. Over the years, two major OTAs, Expedia (EXPE) and Booking, have been establishing a greater presence in the industry by acquiring travel-related platforms and services and adding more users to their ecosystems. Currently, both of them form a duopoly in the OTA field, which benefits both companies. As one of the biggest travel websites in the world, TripAdvisor remains one of the major sources of traffic for those companies. However, the spread of COVID-19 forced them to cut their advertising budgets and preserve as much cash as possible to survive the current crisis. Since the whole travel industry is in disarray right now, TripAdvisor is expected to lose a substantial amount of money this year, as its advertising revenues will decline in 2020. In May, Deutsche Bank (DB) downgraded TripAdvisor due to its high reliance on other companies that use its platform for advertising.

The good news is that TripAdvisor is more than just an advertising and reservation platform. TripAdvisor is first and foremost a community-based platform with social media and online search features, which helps its users to find everything they want about travel. With nearly a billion of reviews and opinions and more than 460 million average monthly users, TripAdvisor can leverage its platform by offering different experiences to travelers. In the last 3 years, the experiences and dining (E&D) business was growing at a compounded annual growth rate of 31% and it currently accounts for 29% of the overall revenues, an increase from 17% in 2017. By pivoting to E&D, TripAdvisor was able to diversify its sources of income and offset some of the declines from its advertising business. 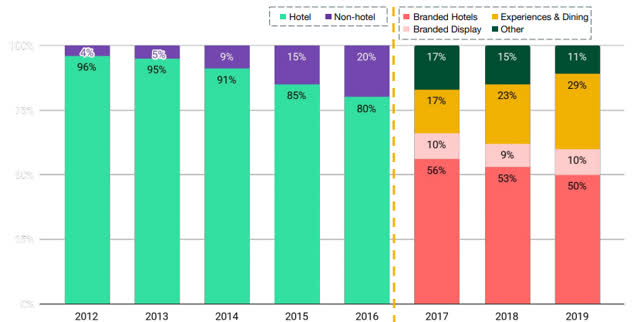 While the pandemic will also hurt the E&D business this year, TripAdvisor has enough liquidity to weather the current storm. At the end of Q1, TripAdvisor had $798 million in cash reserves and the ability to draw an additional $300 million from its credit facility. Its total debt is $725 million. At the same time, on Tuesday, the company announced the launch of a $500 million debt offering, which will help it to survive the pandemic. Since TripAdvisor expects to return to profitability in a few quarters, I believe that the stock has finally hit the bottom and all the downside is already priced in.

Two weeks ago, the company said that it has seen a 38% increase of unique users in May in comparison to April. It expects the number of users to rise even more in June in comparison to May, as there’s an indication that the industry starts to recover from the pandemic. Companies like Airbnb (AIRB) and Booking also said that they’ve seen an improvement in bookings in the last couple of months. All of this suggests that TripAdvisor will indeed be able to return to profitability sooner rather than later and its stock is a solid rebound play from the travel industry.

The major risk that TripAdvisor currently faces is the increased competition from Google (GOOG)(GOOGL). After Google launched Google Travel in 2019 and started to offer affordable deals for hotel rooms and air tickets for travelers, TripAdvisor’s metasearch business declined by 4% Y/Y in the same year. While the metasearch business is expected to decline even more in the next few quarters, since TripAdvisor is now in a confrontation with Google, the company still will be able to create value. By having nearly half a billion active monthly users along with one of the largest libraries of travel-related content on its platform, TripAdvisor will continue to be an important player in travel. Its decision to expand its E&D business in 2017 already yields positive results and will help the company to offset some of the losses from other businesses.

At the same time, TripAdvisor could become a takeover target for Google or other OTAs, which want to establish a better presence in the online travel niche. With more than $110 billion in cash reserves, Google will have no problem purchasing TripAdvisor, which has an overall market cap of less than $3 billion, if it decides to expand the Google Travel platform and increase its market share in online travel.

With all of this in mind, I believe that TripAdvisor is a solid company to own. By having a positive net cash position and attractive growth prospects, it will be able to create value in the foreseeable future, as travel rebounds.

Disclosure: I am/we are long TRIP, BKNG. I wrote this article myself, and it expresses my own opinions. I am not receiving compensation for it (other than from Seeking Alpha). I have no business relationship with any company whose stock is mentioned in this article.