The following was written by ARLnow staff photographer Jay Westcott, before he underwent successful hip surgery on Tuesday. Jay is doing well and about to start physical therapy. We expect him back on the Arlington beat in September.

I’ve been trying to write about the last four months or so for a few days now. It seems like a blur, right? Or maybe it just seems that way because staring at a blank screen for days has made everything blurry. Now then, where are my glasses?

Four months ago, toward the end of February, someone dear to me died. She suffered a long illness and I documented things along the way, trying to make sense of what was happening the best way I know how: through a lens.

One week after the funeral, Virginia was in lockdown because of Covid-19. I hit the ground running with an N95 mask and my cameras and with that same purpose, trying to make sense of what was going on by getting to work and documenting things as best as I can through my lens.

The running part has been difficult, let me tell you.

About 11 years ago, when I was living in Westover, I quit smoking. Awesome, right? I knew that I needed a lifestyle change and that regular exercise had to be a part of it. I never really cared for running and being so close to the Custis Trail I figured I would get a bike and see how it went. I instantly fell in love with the freedom and the speed and I rode all the time. I loved it. I even joined the Arlington-based cycling club Squadra Coppi and started racing.

In the fall of 2010 I started feeling pain in my hip. It got progressively worse and in 2011 I learned I had a condition called Femoral Acetabular Impingement. My femoral head and hip socket were shaped abnormally, limiting my range, and the repetitive motion of cycling likely exacerbated things tearing the tissue in my socket. I had arthroscopic surgery at Virginia Hospital Center in July 2011 to reshape my femoral head and acetabulum and pin down the soft tissue. After 9 months of recovery and physical therapy I was able to throw a leg over a bike again. I even raced one month before the first anniversary of my surgery. I finished 22nd, but on the lead lap. 😉

Fast forward to the spring of 2018 and I started having that familiar intense pain in my left hip again. Between dealing with the Veterans Administration health care system and moving for a job, it wasn’t until December 2018 that I had another arthroscopic surgery to remove bone growths and repair tears in my hip socket. I was out completely for 8 weeks and wore a brace for 12 weeks, locking it straight when I slept.

The results of that surgery have not been so great. Despite two rounds of physical therapy I deal with daily, continuous pain in my hip. It’s gotten progressively worse, to the point where I am having trouble sleeping. In early February I learned that I would need another arthroscopic surgery or possibly a replacement. Then Covid-19 hit. A telehealth appointment in March ended with the VA telling me to “come back after coronavirus, maybe June?”

While covering 7 protests in 7 days at the beginning of June, I also saw a couple hip specialists and had a 3D CT scan. I’ve literally worked myself to the bone for you, Arlington! The consensus is that while I could probably have another arthroscopic surgery, the recovery is very long and at some point soon I’m going to need a replacement anyway. It might as well be now.

I’m scheduled for an anterior approach total hip replacement on July 7 with Dr. Gautam Siram at an outpatient surgery center in Bethesda, Md. I’ll be out completely for 6 weeks, and will be on some form of light duty after that for a number of weeks depending on how my recovery goes. He’s a Washingtonian “Top Doc” and came highly recommended, and accepts my insurance. Luck be a lady tonight.

So, for those keeping score at home, in the 34 day span between Feb. 11 and Mar. 16, I found out I needed a hip replacement, my dear friend died, and then a pandemic broke out and we went into lockdown. When I look back at my pictures from the last few months, you can feel the loneliness in them. I just wanted you to know where that feeling came from. I have been trying to make sense of a lot, and it’s been an overwhelmingly lonely process. At times it’s felt relentless. My job is fairly autonomous to begin with, and then the lockdown has isolated everybody. I’m thankful for not drinking since Feb. 15, good friends, and a great therapist.

While cases in our area have been trending down and things are reopening, numbers of new cases across the country are reaching new highs again and again with each passing day. Outbreaks in Michigan have me nervous, that’s near where my family lives and my sister is flying here on Monday to help me out after my surgery.

The science hasn’t changed, folks. I’ve said it before, if 80% of us do something that is 60% effective, we can drastically reduce the spread. That something is wearing a mask. How is this a political thing? I mean, it’s straightforward math and science, it’s that simple. When I am out and about, the people not wearing masks more often than not fall into one of two groups: white people under 30 and white people over 55. I also see about half the people with masks wearing them incorrectly. They have to cover your mouth and your nose. It doesn’t work otherwise.

While covering those protests, myself and nearly everybody around me were wearing masks, people respected personal space and we were all outdoors. The practices we all took worked. The numbers don’t lie. So let’s keep doing that, right? Seriously, every other ad on Instagram right now is for a mask, I’m sure you’ve seen them. If you can order artisanal sourdough starter from an Instagram ad, you can order something that will save lives. Do your part and wear a mask. Insert “We’re all in this together!” GIF here.

As I look back through these pictures of a virtually empty Arlington and back through the data, it’s easy to feel overwhelmed. We are in unprecedented times. But June brought hope, and communities came together across the country to call for justice in the wake of George Floyd’s murder, including right here in Arlington. Seeing young people put these large rallies together, day after day, making sure people felt safe and welcome, was inspiring and heartwarming. The generation coming up, my daughter’s generation, is taking action and getting things done. They are being the agents of the change they wish to see. I am so proud to document these moments.

A colleague on a Zoom call the other week asked me what my favorite picture was from the last few months. Questions about favorites are always hard for me to answer, certain stories have certain memories that are tied to them. But I think this picture of Black Lives Matter protestors marching over the Memorial Bridge, with Arlington House, former home to Robert E. Lee, in the background, is a favorite. That land, that house, was called Arlington before the County was. Of the 10,000-plus protesters in Washington that day, 3,300 of them came across this bridge and past that house in the background. It felt like a moment. It felt like a step toward justice. 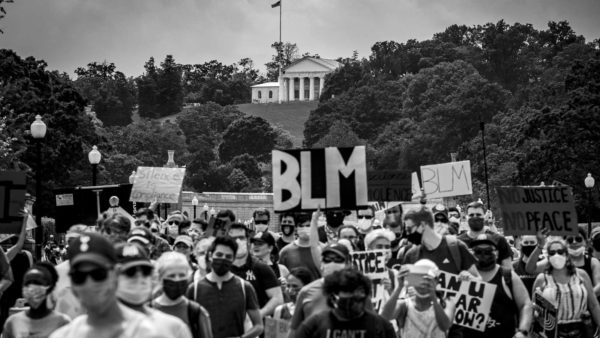 With everything going on, I figured it would be a wise and healthy choice if I quit drinking, and I haven’t had a drink since Feb. 15. I’ve lost about 20 lbs and feel significantly better. Hopefully shedding that weight and eating healthier will make my recovery from surgery better, too.

There are photos that stay with me. The person begging for help with a cup tied to a stick and a sign is the only person in the picture wearing a mask. This was April 1. The fence in the background is the site for HQ2. This pic was outside a Whole Foods. It’s a hard picture to look at and think about. I think about the disconnect between the abundance of wealth surrounding this person and how unavailable any of it is to them, to the point where their best option is to hold a cup on a stick asking for money.

The pic of the masked couple walking by Botanica Boricua on Columbia Pike. I went to that spot for a few days to try and make that picture, trying to time foot traffic and good light. Is this pandemic biblical? There are people questioning their faith in all of this and there are people holding onto it. This picture speaks to both of those sides. That’s what I was thinking when I made it.

The crowd of people at the Mega Mart Express on Columbia Pike. This was in April during the peak here. I felt so bad for some many people who waited so long, at the same time I felt so scared for them, and for myself. I’m scared to get this virus. I have no idea what my immune system would do, I’m allergic to everything! I have alpha-gal allergy, bee/wasp allergies, and am allergic to every pollen out there. The only way to get good pictures was to go through the crowd, and I did as carefully as I could. There were so many people. I had to park on Four Mile Run Drive and walk the rest of the way, because traffic was so backed up for the event.

The pic of the crows flying over the ambulance in Rosslyn. I’ll never forget the sound of those crows’ caws echoing off the canyons of glass and steel and empty streets while the red and white lights of the ambulance flashed off the building I used to work in.

I have tried to capture what it feels like to live here and work here during this time. What it feels like as we adapt to new ways of doing things, whether those things are mundane or monumental, and how some things are just gone as we know it for the time being. And I have tried to remind readers and viewers that sunsets are still gorgeous, good light makes every picture better and kindness and empathy matter now more than ever.

Pictures from the slideshow are available for purchase, you can order prints, downloads and other products of some of my favorite pictures from around town and pictures that you may have seen on our Instagram account. You’ve been staring at the same walls for months now, change it up! The metal prints are really amazing. I am hoping to raise some money to help with my medical expenses.

I am so proud to be an Arlingtonian, and honored and humbled to be here at ARLnow. Thanks for following along.