I turned £5 into £90 betting on football so thought I must be good at it. That was disastrous

Smartphones, online gaming and shrewd marketing have led to such a shocking rise in young problem gamblers, the NHS has opened a specialist clinic solely for teenage addicts. And the scariest thing? Many parents were oblivious to the issue, discovers Sally Williams

James Grimes was your average football-mad 15-year-old. Living in a small town in Norfolk, his two passions were local team Peterborough United and Premier League side Tottenham Hotspur, and his dream was to be a top-level football coach: ‘I had a ten-year plan written on my bedroom wall,’ he says. Then, one day, a friend suggested they bet on a football match.

James thought it would add more excitement to something he already loved. James waited outside the bookmaker while his friend – who was older but still under the minimum legal gambling age of 18 – went in and placed a £5 accumulator bet predicting the outcome of a few matches. For the bet to pay off, every prediction has to come out right. It’s a high-risk, high-payout option.

James went home to watch the results on TV and was astonished when he got every prediction right and his £5 bet returned £90. ‘I remember thinking, “Oh my God, this is amazing! Why is everybody not doing this?! You can turn £5 into £90 with a kick of a football.” But I also thought, “I know how to predict football matches. I must be good at this.” That was disastrous.’ 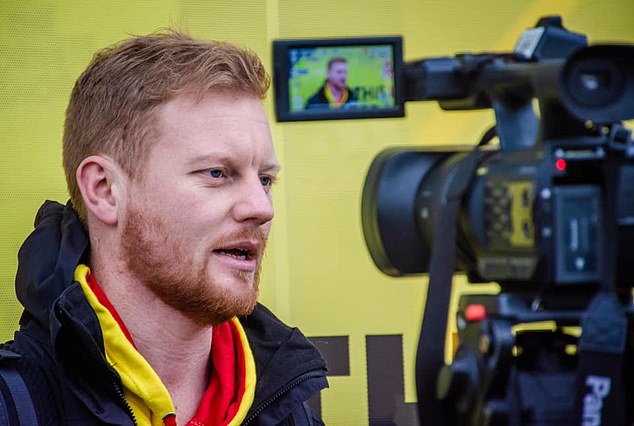 Gambling soon became a part of James’s social life. He played poker with friends and bet on greyhounds and football matches. ‘It was a small town. We knew the person in the betting shop. I definitely placed bets in there underage,’ he says. But there weren’t many other big wins, ‘It was just a slow dwindling of all the money I could get. When I was in sixth form, I had a car and if I had £5, I’d think, “Shall I buy petrol, or shall I take this to the bookie and try to turn it into £20?” Then I’d run out of petrol and Dad would have to tow me home.’

He thinks his parents probably had an idea of what was going on but that they hoped it was just a phase. They had no idea of the extent of the problem. ‘I was still a child and had nowhere else to turn, so they had to bail me out,’ James says. But by the time he left home to study business management at Sheffield Hallam University, James was £2,000 in debt to his family and friends. By 28, his gambling had escalated to the extent that he had 20 payday loans and owed around £30,000.

Almost one in 25 school pupils, according to the Gambling Commission, is now a problem gambler or at risk of becoming one, a figure that has doubled since 2017. Problem gambling – of which James is an example – is self-destructive and addictive behaviour. Teenagers often first get involved in the same spirit of experimentation and entertainment as with booze or drugs.

As many as 11 per cent of young people (the equivalent of around 350,000 11- to 16-year-olds) said they had gambled in the previous seven days, according to the Gambling Commission’s 2019 report. They were more likely to have gambled than taken drugs, smoked cigarettes or vaped – the only activity that was more popular was drinking alcohol.

This has been spurred on by easy access to gambling online, says Dr Henrietta Bowden-Jones, director of The National Problem Gambling Clinic in London, which offers specialist help for children and young people aged 13 to 25. The service opened at the end of last year in response to the high numbers of young gamblers and is the first

NHS clinic of its kind. She says, ‘In the old days, you’d need to get to a bookmaker, and that would have been difficult for young people living at home or on university campuses. Now gambling has moved online, and every teenager has a phone, which has definitely heightened the problem. We know there are 55,000 children who are problem gamblers in this country. But many more will be at risk of developing a problem.’

Not least because of the way gambling has filtered into our daily lives. A report by market research company Ipsos Mori and the University of Stirling, released in March this year, found that the constant stream of advertising that British children are exposed to makes them more likely to bet in later life.

It cited TV advertising and social media as some of the factors likely to lead young people to gambling.

This prompts concerns as to how increased exposure would have affected young people during lockdown, when they increasingly turned to social media and TV for entertainment. Researchers found that 96 per cent of people aged 11-24 had seen gambling marketing messages in the past month. The report

also estimated that 41,000 UK followers of gambling-related accounts on Twitter were likely to be under 16.

What is counted as teenage gambling is interesting. It includes obvious activities such as playing poker with friends, slot machines in arcades and placing a bet in a betting shop through an older friend. The commission also identifies games such as ‘penny up’ (the name varies), a seemingly harmless children’s pastime seen in the playground where several players throw a coin against a wall and the person who bounces theirs back the furthest wins the lot.

‘Children are losing all their week’s pocket money,’ says Dr Jane Rigbye, a chartered psychologist and director of education at the charity GambleAware. ‘For some children it will be an activity they can control; for others it will be really problematic. The concern for me is what’s the harm that happens next?’

There are also plenty of watered-down online casino-type games on websites or apps where no money changes hands. Parents tend to assume these are safe for children to play but that’s not the case, says Dr Bowden-Jones. Children can get near-miss sensations and the same emotions (the highs and lows) a gambler gets, even though they are not losing anything. ‘It’s still roulette. It still excites them,’ she says.

‘One of my young patients became addicted to gambling through scratch cards,’ she continues. ‘His grandmother used to buy them for him and he found them very exciting.’ The mechanism behind a scratch card is identical to roulette or sports betting, she explains, ‘You are putting something at stake – the cost of the scratch card – in the hope of getting something of greater value. The outcome is not based on your skill. It’s just chance.’

Of course, for the most part these games are harmless. The process by which teens get hooked on a gambling habit is complex. However, there are known risk factors such as a predisposition to act on urge rather than thought. ‘We know young people in general have high levels of impulsivity, but these young gamblers even more so,’ says Dr Bowden-Jones. While boys are at risk of becoming problem gamblers because generally they are greater risk takers than girls, we know that women’s brains respond very similarity to the excitement of gambling. Early traumatic events such as emotional or sexual abuse can also be significant, as can a family history of addiction.

There is still a cultural hangover from when bookmakers were a no-go for women, but that’s changing. Women are very capable of being problem gamblers; one in ten patients at the national gambling clinic are women. ‘I have treated some girls,’ says Dr Bowden-Jones. ‘Now the internet is making gambling available for everybody, we’re likely to find a new generation of young women who are having problems.’

But it isn’t only genes and the way children are nurtured that matters. It’s the environment, too. James Grimes argues that the most profound external influence on his life and what lured him into gambling in the first place is the ‘gamblification of sport’. Now 30, James is a recovering gambling addict. He has recently

set up The Big Step, a charity project through Gambling with Lives, to campaign against the betting industry’s grip on football. He points out that 27 of the football clubs in the Premiership and Championship have shirts emblazoned with a gambling company’s logo, a powerful message to send to young fans. ‘I’d like parents to know the truth behind the likes of Betway on the shirts of West Ham and Bet365 on the front of Stoke. The gambling industry has latched on to one of the most loved things in our country – football – and uses it to infect young minds. Children are being told that gambling is normal and it’s glamorous. That’s a recipe for disaster.’

Children are being primed for gambling in other insidious ways, too, say experts. ‘Loot boxes’ and add-ons, which are bought for real money, have become increasingly popular in video games. A 2018 survey by the Gambling Commission found that 31 per cent of children aged 11 to 16 had paid for them. For a small fee, you can buy an assortment of items that promise to enhance your game: in Mario Kart Tour, for example, a free-to-download mobile phone racing game, ten rubies (£5.99) will give you the chance to fire a pipe that might get you a ‘super’ character such as Mario. In the football game FIFA 18, you might get Lionel Messi or Cristiano Ronaldo for your Ultimate Team, but it could cost you as much as £16.66 for an Ultimate Pack. The key word is ‘might’, because it’s more likely you’ll get other players whom nobody will want when you try to trade; the odds of winning Mario in Mario Kart Tour are 100 to one.

Loot boxes are an appealing source of income for game developers. The problem is that players are sucked in by the excitement and uncertainty of whether or not they will win. In that respect loot boxes, say critics, are much like gambling aimed at kids. Last year, a House of Commons committee advised that video loot boxes should be regulated as gambling and children should be barred from buying them.

‘Not everyone who games will become a disordered gambler,’ stresses Steve Watts, a former teacher and founder of GamFam, a charity that helps families recognise the early warning signs of gambling addiction. ‘But I worry there will be more and more cases as this style of gaming develops.’

Parents, he says, are often oblivious. ‘The other day a parent whose daughter had spent £1,500 on loot boxes rang me. She had no idea until her bank statement came through that her credit card was attached to the iPad.’

So what signs should parents look out for? ‘Spending money online without permission, changes in attitude to school, isolating themselves in their bedrooms and not coming down for meals and, when they get older, increased post delivered to the house [as these could be letters from loan companies]’. Lessons in financial management are also important, he says, particularly when children go to university, as gambling companies target new students with free bets and casino nights.

James thinks that because he wasn’t the stereotypical image of a gambler – ‘five older white men, sitting around a table with a coffee talking about their biggest bets’ – his addiction wasn’t so easily identified. And experts worry that young gamblers are still swept under the carpet, eclipsed by a focus on drugs and alcohol. ‘We need to take this illness seriously,’ says Dr Bowden-Jones. ‘A gambling disorder, let’s be clear, is a behavioural addiction and it ruins lives.’